Ex parte Hicks is a 2007 decision of the Board of Patent Appeals and Interferences (BPAI) that is listed among the Patent Trial and Appeal Board’s (PTAB) informative decisions. Ex parte Hicks is indicated by the PTAB to be informative as to “Specification and claim requirements – 35 U.S.C. § 112… Enablement… Indefiniteness… scope.”

In Ex parte Hicks, the BPAI considered whether a compound claim defined by a broad, generic chemical formula was properly enabled and definite.

Independent claim 23 was at issue:

A compound of the formula 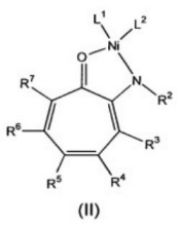 R2 is hydrocarbyl or substituted hydrocarbyl, provided that R2 is attached to said nitrogen atom in (II) by a carbon atom that has at least 2 other atoms that are not hydrogen attached to it; and

In rejecting the claim, the examiner focused on the broad scope of certain limitations (emphasized above) and the limited number of working examples in the specification.

As to enablement, the examiner conceded that the specification included some working examples of compounds within the scope of the claims and was enabling for at least those compounds. However, the examiner asserted that “[t]here is no guidance or working examples present for compounds of the formula II with varying functional groups or ligands.” As evidence that the claimed compounds could be made without undue experimentation, applicant provided the examiner with results of a Chemical Abstracts search, showing that synthesis of substituted aminotropones in which the nitrogen atom is a secondary amine was known in the art. The examiner argued that this evidence did not address the specification’s deficiency in showing how to synthesize compounds within the scope of the claim with varying functional groups.

The BPAI emphasized that that the lack of working examples alone is not fatal to a finding of enablement, because the patent specification is written for a person of skill in the art, and such a person comes to the patent with the knowledge of what has come before. The BPAI found that the examiner had merely pointed to the absence of working examples without providing argument or evidence to rebut the applicant’s evidence, and this was insufficient to sustain an enablement rejection.

With respect to the term “functional group,” the examiner noted the specification’s definition as “groups which are inert under the process conditions to which the compound containing the group is subjected and which do not substantially interfere with any process that the compound in which they are present may take part in.” The examiner asserted that this functional definition was not sufficient to permit identification of functional groups of any particular structure, much less provide guidance as to how to synthesize compounds including combinations of functional groups.

The BPAI noted the specification’s disclosure of “the process conditions to which the compound containing the [functional] group is subjected,” and stated that the examiner had failed to provide evidence or reasoning for why a skilled artisan would not have been able to determine whether a functional group falls within the scope of the claim without undue experimentation.

The examiner further asserted that the term “substituted” in “substituted hydrocarbyl” rendered the claim indefinite because of “the absence of the specific moieties intended to effectuate modification by ‘substitution’ or attachment to the chemical core.” The specification defined a “substituted hydrocarbyl” as having “one or more substituent groups which are inert under the process conditions to which the compound containing these groups is subjected. The substituent groups also do not substantially interfere with the process.” The BPAI again found that the examiner had failed to demonstrate why a skilled artisan would not have been able to identify substituents falling with the scope of the claim based on the functional definition.

Takeaway: This case was decided based on the BPAI’s view that the examiner failed to carry his burden. If an examiner rejects a compound claim as not enabled or indefinite based on the breadth of a feature of a compound claim, the examiner should be pressed to provide evidence and/or an affirmative rationale for why the feature would have been beyond the grasp of a skilled artisan. Use of terms like “substituted” can be desirable as they provide flexibility and breadth. While it may be undesirable to explicitly identify every substituent intended to be encompassed by a term such as “substituted,” a functional definition and identification of some exemplary groups may be helpful in avoiding rejections/challenges based on scope.